The scalp micropigmentation process has evolved significantly since the development of basic hair tattoo techniques in 2002.

Back then, the very concept of scalp pigmentation was groundbreaking enough, and the media attention that ensued was brisk and extensive. Now however, clients have more choices than ever before, and as I predicted recently, this trend is only going to continue.

One of the most significant developments has been the introduction of 3D scalp micropigmentation. Whilst not strictly three dimensional, this advanced technique creates a 3D appearance and can further increase the realism of the treatment.

Where did the idea come from?

There were various discussions on different web forums related to the potential value of a three dimensional process. The idea stirred significant interest. In particular, I remember this discussion on the HIS Hair Clinic forum a couple of years ago where a client believed his procedure looked three dimensional following his request for a variation of the standard process.

Simon Lane and Paul Clark, two highly skilled technicians at Brandwood Clinic, recognized the potential in a 3D solution and began experimenting with the concept. They later turned it into a commercially viable and repeatable process, and are now experiencing great success with their new technique at Brandwood. 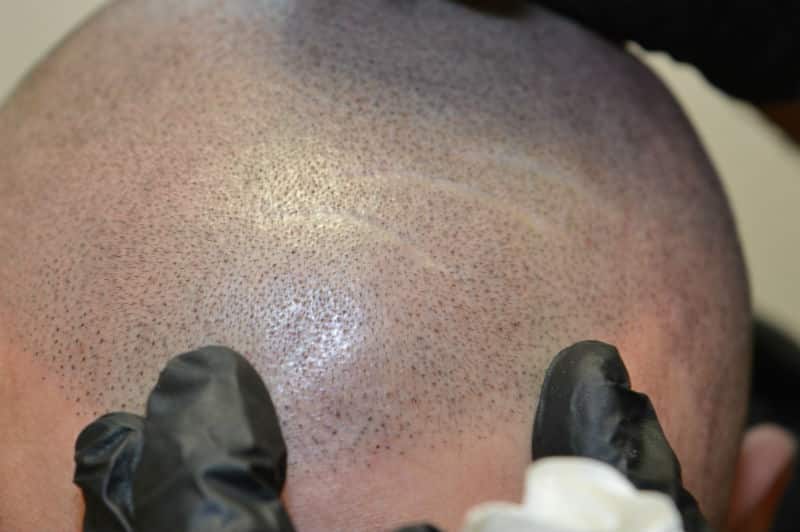 In essence, the 3D effect is created with the addition of a final ‘layer’ of pigment after the standard procedure would otherwise be deemed complete. This final layer is significantly darker and more sparsely distributed, and is commonly referred to as a ‘scatter-through’. The result is a textured effect with some of the replicated follicles ‘popping out’. As some dots are darker than others, they stand out more.

This creates the three dimensional look that many people feel is lacking from traditional scalp micropigmentation. 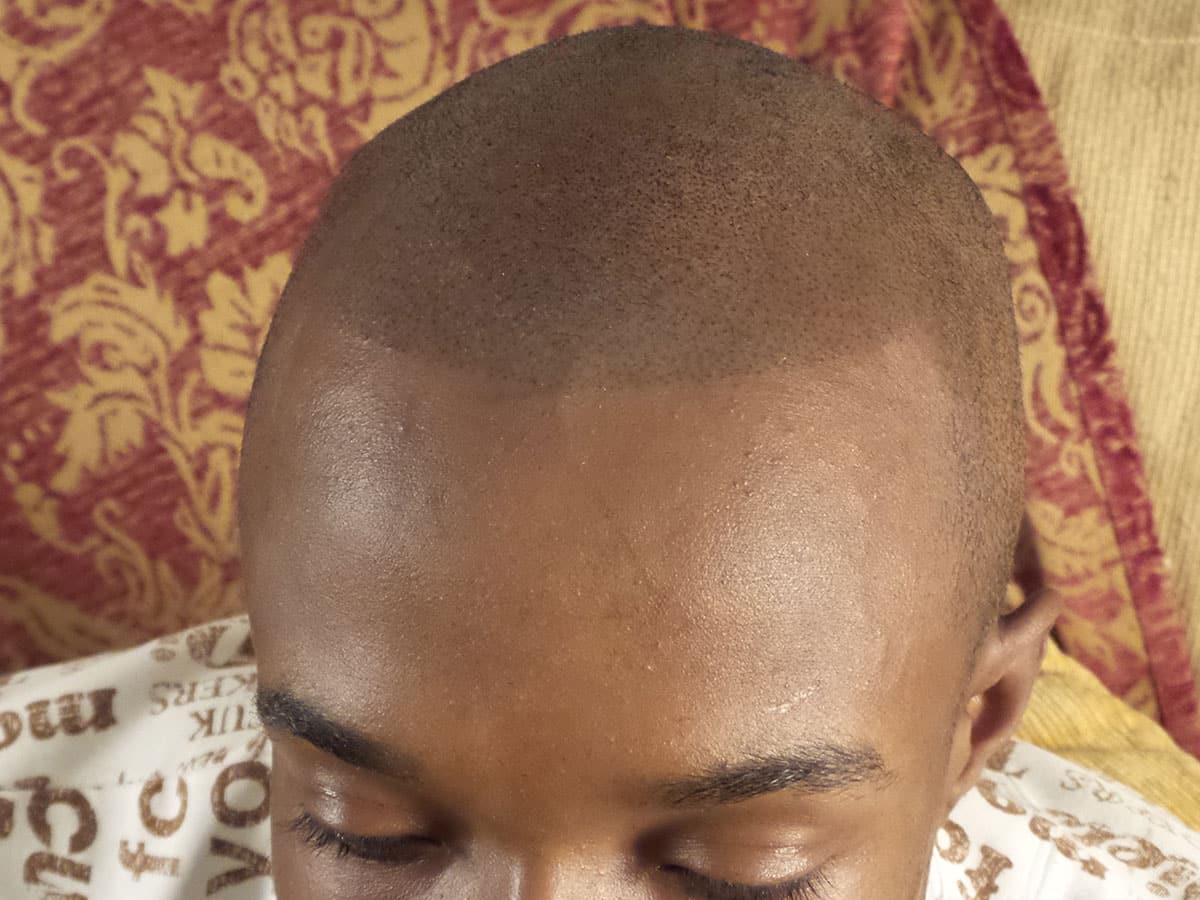 Great idea, right? Well, to a point. 3D scalp micropigmentation sounds straightforward enough, but it takes a significant level of skill to execute effectively. Poor delivery carries a number of risks including an overly dark appearance, too much density and a fake ‘dotty’ look. For this reason, it is important to choose your technician with care. Most technicians are not aware of the 3D process, and many do not know how to execute it effectively.

Which clinics offer a 3D process?

Brandwood Clinic in the UK offer 3D SMP, as pioneered by Simon and Paul. Their process has been used many times now, and the results look very promising.

In addition, I’ve seen a similar effect produced by other clinics, even though they do not actively promote a 3D process. The most skilled technicians understand the concept of a textured effect and how to deliver it, but you need to make sure the technician you choose understands exactly what you’re looking to achieve. 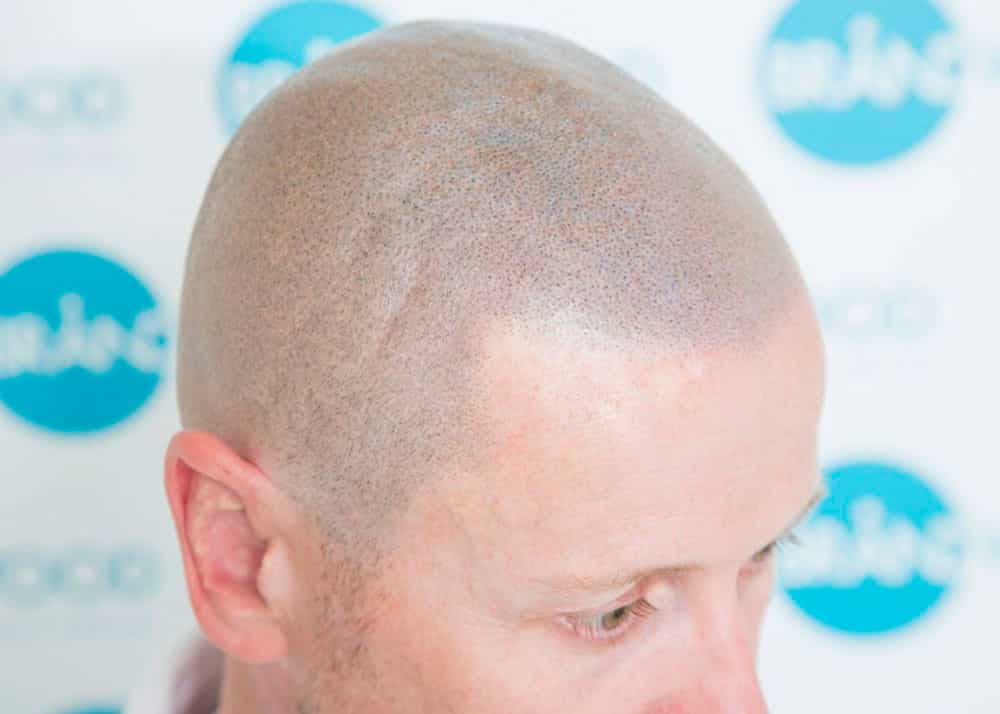 I believe that 3D scalp micropigmentation is a genuine and viable option for those who want an ultra-realistic outcome from their procedure.

I would argue that any highly skilled technician with a significant level of experience could produce a 3D effect, in fact many do as a matter of course in their effort to produce the most realistic illusion of real hair that they can. Some of the world’s best technicians regularly produce results that could be described as three dimensional.

However, if the 3D effect is something that you absolutely must have, and would make or break your satisfaction with your new look, you should consider using a clinic that understands the 3D process. For this, I would suggest Brandwood Clinic or ShavenLook in the UK, or Scalp Micro USA in the US.

Matthew Iulo of Scalp Micro USA has his say

Following publication of the original article (above), renowned artist Matthew Iulo gave us his thoughts.

What can you expect?

Here’s the thing – the illusion of 3D can be achieved by a skilled technician. The concept is achievable, but the tricky marketing must go. Let me explain…

Scalp micropigmentation overall is about creating the most believable look of replicated hair as possible. The goal is to always make every transformation look as close to 100% undetectable and as “3D” as possible, and this is something that every clinic or provider should be aiming to do. This shouldn’t be something advertised or priced as a separate or elite option. It’s something that is at the core of the treatment itself.

So how does one achieve this “3D” illusion (note I say illusion)? Well, it’s not through some special ink or patented 3D needle. It’s through a proper treatment gameplan with your selected technician. The idea is to create depth and layers on your scalp to help depict dimension. This has to be done over the course of multiple sessions. Without selling all my secrets in this article, the technician should be educated and skilled enough to:

Some of this may make sense to you, some might seem a bit of industry jargon. But that’s okay. The point is that a skilled, experienced, and most importantly honest technician should be able to create this illusion for you.

A video version of this article is shown below:

A note from Simon Lane of Brandwood Clinic

In response to the original article (above), Simon Lane also shares his thoughts on this topic.

It seems appropriate for me to wade into the debate over whether scalp micropigmentation can be legitimately described as three dimensional.

There’s no doubt that Matt Iulo makes some great points in his eloquent feature on the subject, and he’s absolutely right to state that he – and all the other highly skilled proponents of the treatment – always strive to create the most authentic appearance possible. It was that very rationale that Paul Clark & I used when first discussing and preparing to launch the 3D procedure.

Like many people who’ve been in the business for some time, we weren’t entirely certain it was possible, but we were determined to try. In January 2015 we found ourselves with the time and opportunity to do so. We began by researching different pigments and needles, meticulously. We were absolutely dedicated to finding the best components with which to launch Brandwood Clinic.

Finding an organic pigment was very important to us, arriving at one that was also vegan-friendly ticked a huge box for my business associate Mr. Clark. Those of you who know him – or have encountered him on social media – will be well aware of his stance on these issues.

Once we had the equipment we began by using different shades and pressures on our legs. To this day me & Paul still bear the experimental marks. After a month or so we were happy that we had both the shades and the technique. The next step was clearly to trial the procedure on a willing victim. We ideally needed someone who already had scalp micropigmentation and was willing to submit himself for the greater good. Paul didn’t have to look far whilst I only had to look in the mirror.

‘3D’ is very much about pigment placement, an artistic eye for detail and not so much about density. We had arrived at a combination of shades that we felt could refresh an existing look, adding that dimension that we were keen to achieve. It was pretty much an instant success. Family and friends immediately commented saying it looked more ‘buzzed’ than shaven.

When first discussing the concept of 3D, it is true to say that we were looking for an effect that enhanced the appearance, that didn’t look flat and allowed certain pigment placements to ‘pop’ like they were real hair follicles. What I discovered though was that I was able to change my shaving routine, I could leave it one or two days as the blend was no longer quite so obvious.

I had previously wet-shaved my head on a daily basis but I was now able to leave it a day and switch to a beard trimmer rather than a razor. Whilst we were keen to use the definition of 3D for the treatment to differentiate it from the standard service available elsewhere, it was this extra growth that gave us the confidence to call it the ‘3D texture effect’.

Until this development all clients had to shave all their hair, this is a clear advantage for some people. With the 3D procedure a client who has thinning hair (around Norwood 4) can grow his hair slightly longer than a Norwood 7. The reason for this is simply that he has consistent thinning on the top of his scalp and the combination of hair and 3D scalp micropigmentation will create a thicker illusion, allowing for an extra day or two’s growth. It is that effect and appearance that gives us the confidence to claim that 3D is more than just a marketing device.

Me and Paul Clark have always been keen to innovate, to develop new styles and techniques. Many technicians, particularly those who’ve been working in micropigmentation for any length of time, adopt the same approach. We have the client’s interests at heart and want them to leave us feeling renewed and confident. Now everyone coming to Brandwood Clinic, old client or new, can have the most advanced treatment available.

We’re happy to have introduced 3D into the world of scalp micropigmentation, we think it can help to make the procedure a more popular and widely-adopted treatment for hair loss. I know that all of us want to be at the forefront of that campaign!

An integral part of the scalp micropigmentation story since 2009, Damien has a broader understanding of the global SMP industry than anyone else in the world. Advising clients and artists alike, Damien is a passionate ambassador for SMP and commentates on an ongoing basis as the industry develops.

How to remove a scalp micropigmentation treatment

How undetectable is scalp micropigmentation?